I had a breakdown on my bike today. I was out recording cycle routes for people going to the Nightingale Hospital for their COVID shot (this one a route from Barking) and got a puncture for my trouble.

As I stopped and seethed on the waterfront of Royal Albert Dock, prying the nail from my front tyre, I realised that, while this was probably somewhere I’d been before, this was the first time I was taking the environment in properly. The architecture varied from ‘surprisingly interesting’ to ‘unexciting but inoffensive.’ What really surprised me was exactly how quiet it was.

Far away from any major roads (not my usual experience of the Docklands, and certainly not true of the route I’d taken from Barking) all I could hear was the sound of the occasional DLR train, the footsteps and freewheels of passing walkers, runners, and cyclists, and the gentle wash of the (still) water.

What was conspicuously absent, once I realised where I was, was the sound of aeroplanes. Because this was just across the dock from where London City Airport is.

This will probably get my ‘environmentalist’ card confiscated: I have used City Airport several times in the past. I never liked it much. The promise of the promotional video from the 90s (i.e. businesswoman who probably voted for Thatcher four times and has classical music following her around as she hops into a taxi to sign a business deal in Fleet Street) always seemed a bit far-fetched for the 2010s. It’s true there’s less distance to walk. There are also exactly the same problems with bus transfers (particularly when they shove you from a just-arrived flight into a bus to drive you the few hundred metres from one end of the terminal to the other, because the public can’t be trusted to walk along the edge of an active airport terminal), overpriced food, a duty-free maze, the security-mandated striptease, the way airlines seem incapable of not letting down passengers who use wheelchairs… I could go on.

But quite aside from any of this—arguably an inherent problem with air travel, and part of why I don’t fly any more unless I can possibly avoid it—there’s another beef I have with City Airport, that I didn’t truly understand until I was in a meeting at Beckton Community Centre a couple of years ago. I’d ridden there in the pouring rain with a friend in the dark, and the ride there was enjoyable—and yet, as we settled down to business, still soaking wet, we kept getting distracted by the sound of jet engines.

Beckton Community Centre, and indeed the entirety of Beckton, is within spitting distance of the airport, to the point where even inside modern buildings, the sound of jet engines is unavoidable. I dread to think what it’s like if you live in an older building, or in one of the new developments overlooking the dock. I’m sure the new houses have good insulation, but even that won’t be able to block out everything.

I’ve lived in noisy places before, of course. When I lived in Canning Town, I could occasionally hear jet engines throttling up (presumably from City Airport, although maybe I was actually hearing something else.) When I lived in Mile End, I had the noise from the Great Eastern Main Line to deal with. (Rail tamping machines are loud.)

And yet—standing on Royal Albert Dock today, infuriated that I’d not brought a pump with me, I recognised that the place I stood in was probably a great place to live. Good quality modern housing. Nice views towards central London. Regular DLR trains to London, with a station every few hundred metres or so. Traffic-free waterfront. A well-stocked university library.

But would I live here with an airport operating for most of the day? Even accounting for the fact that the airport no longer proposes to extend its opening hours, the regular sound of jet engines would drive me up the wall.

With the COVID-19 pandemic and the fact we’re currently at the tail end (we hope) of the third lockdown, Royal Albert Dock is peaceful on a Saturday afternoon. As we come out of the pandemic, there’s space for us to ask what purpose London City Airport still serves in 2021.

London City Airport externalises most of its environmental costs onto Newham, one of the most deprived London boroughs and one of the worst affected by COVID-19. Its raison d’être is to funnel Important Business People from taxis, limosuines, and DLR trains into narrow-bodied jets to destinations that should be mostly reachable by train. Although it now also serves people going on weekend breaks and ski trips (again pursuits restricted to those who can afford it) I’m becoming increasingly convinced that, in 2021, this is a relic from the bygone world before ubiquitous mobile phones, reliable conference calls, and reliable trains to Heathrow.

I do have to wonder if those campaigning vociferously against the HS2 railway line, complaining it will destroy ancient woodland and lead to an increase in carbon emissions, have the same energy to campaign to close an airport that seems to pander to the whims and irritations of the richest of the rich while externalising the cost onto everyone else.

Having had first-hand experience, it almost seems like a cargo cult. I’ve been out of Heathrow quicker than I’ve been out of City. While flying on a jet without ‘middle seats’ may be nicer than flying in the middle seat, not flying at all is generally nicer than both of these things. I always find the process of flying and passing through an airport extremely stressful, even out of City, while even the most stressful Eurostar experience has been glacial by comparison. When it comes to domestic travel, there is no competition. True, you may save an hour or two by flying—but why should someone living in council housing in Beckton have their air quality knackered and have their window shake on its frames for the sake of someone saving an hour or two on a journey between London and Aberdeen, which would be much more efficient and environmentally friendly at ground level?

Siân Berry, the Green Party candidate for mayor of London, is voiciferously anti-airport expansion and proposed at the last election to replace the airport with housing. Regrettably, for 2021 Britain, a country that seems obsessed with looking into an airbrushed version of the past, this almost seems too sensible.

But I did think, as I wheeled my broken bike back to the DLR, admiring the quiet, people-friendly space of Royal Albert Dock, without the thundering of A318s and E-Jets above, how nice it would be if we had the vision to say it could always be like this. 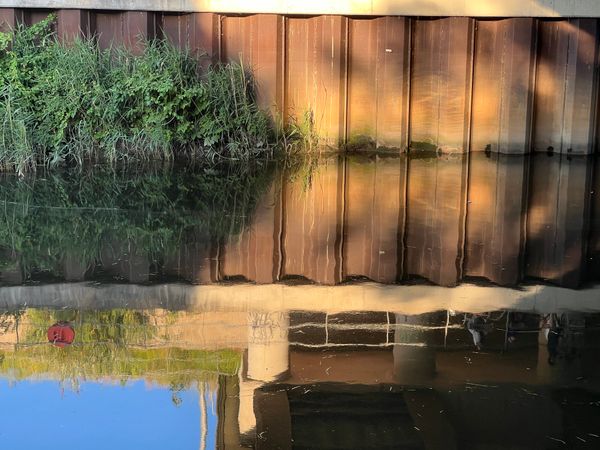